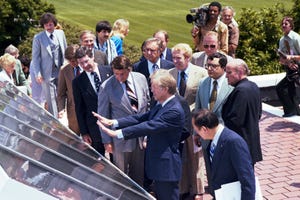 I am looking at the cover of an issue of Organic Gardening and Farming magazine published in the 1970s. A young American family is on the cover. They are standing in their well maintained vegetable garden. Their modest-sized house is in the background.

All three family members appear healthy, strong and happy. Both mother and father wear simple, neat work clothes. He has an arm around her, and she’s holding a baby. That baby could be me, or any other member of my Generation X. Parents are baby boomers in their prime.

It was an uncertain, anxious and troubled time. Oil shortages and soaring energy costs, caused by wars and revolutions in the Middle East, have resulted in stagnating growth and inflation (“stagflation”) in the developed world. Oil production in the United States and elsewhere peaked in the early 1970s, and world production later in the decade. There was plenty of energy left, but the fruit at hand—cheap, plentiful, easily mined fuel—was mostly gone.

Finding the right balance between physical and mental activities

Floridians are deeply concerned about the state’s explosive growth

Should I stay or should I go? When Growth Chases Floridians

Faced with this scenario, our country had two choices. One was to increase local production, open new fields in protected areas, develop expensive and dangerous extraction methods (deep sea drilling, hydraulic fracturing) and increasingly interfere in the politics of other countries through coups, armed interventions and wars, to ensure a steady supply. cheap oil from “friendly” despots and regimes.

The second choice can be described as a “live with less” attitude, exemplified by President Jimmy Carter when he installed solar panels on the roof of the White House, or wore a sweater to address the nation, urging to save energy by lowering the thermostats. Many Americans answered the call, like the young family I described.

Needless to say, the first option prevailed. President Ronald Reagan ripped the solar panels off the roof and promised a return to the status quo: cheap energy and endless consumption. Around this time, the term “citizen” began to be replaced by “consumer”.

Here we are, 50 years later, and our moment in history looks a lot like the 1970s: global instability, stagflation, anxiety. This time, alas, “business as usual” cannot continue. Not only energy, but all resources (fisheries, arable land, water) are stressed to the maximum, close to exhaustion.

The last great energy reserves of the planet are in problematic or hostile countries. Local production cannot be profitable without huge investments and government subsidies. “Alternative” energies are far from being ready to replace fossil fuels.

It seems to me that we will finally have to adopt a more frugal, poorer and more frugal way of life. Endless commutes, errands and restaurant meals transported from afar – so long. Say hello to growing lots of your own food, repairing clothes and furniture instead of replacing them, cutting out entertainment and luxuries.

Much could have been done to prepare us for the inevitable “decline” caused by resource depletion, if we had wisely invested the resources still available 50 years ago. But it’s no use complaining. To paraphrase a Chinese proverb: “The best time to plant a tree is years ago; the second best, today.

If you have to start somewhere, start by growing some of what you eat. Food is energy. If energy supplies are unstable or expensive, food supplies will follow.

Join the club! Plant a garden and raise chickens today – many of your fellow citizens (not “consumers!”) do, rather than relying on someone else for another half-century of gluttony.

I am amazed and encouraged by the resurgence of small-scale organic farming in our communities. But be warned: skillfully growing food requires a skill set that takes time to master. So don’t delay.

Here in North Florida, we are planting for a fall vegetable crop. So get some seeds, plow a garden or fill containers with good soil, and get going!

Get used to it, because only practice makes perfect. Gardening for food is one of the best uses of your time, so throw away the TV, its negativity and addiction to narcotics, and plant cabbage instead.

Santiago De Choch is an organic farmer from Suwannee County. He can be contacted at [email protected]

Letters to the editor present readers’ opinions on news and other articles published by The Sun. Share your opinions by sending a letter to the editor (up to 200 words) to [email protected] Letters should include the author’s full name and city of residence. Additional guidelines for submitting letters and longer guest columns can be found at bit.ly/sunopinionguidelines.

Get a digital subscription to the Gainesville Sun. Includes must-watch content from Gainesville.com and Gatorsports.com, the latest news and updates across all your devices, and access to the eEdition. Visit www.gainesville.com/subscribenow to sign up.