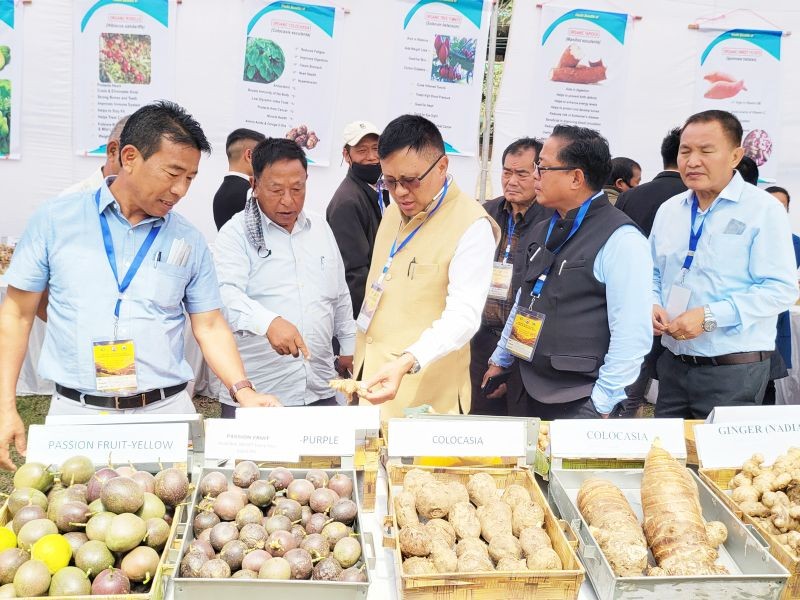 With the aim of providing a platform for all stakeholders including farmers, aggregators, entrepreneurs, processors, exporters and financial institutes to partner and network to create long-term links Eventually, a conference and buyer-seller get together for agricultural and horticultural products with focus on Nagaland organic products was held at the Saramati Hotel, Dimapur on March 11.

Among other things, another objective of the meeting was to facilitate the opening of organic products in the state and to promote the “Naga Organic” brand for the national and international market.

Addressing the meeting, Agricultural Production Commissioner (APC) Y Kikheto Sema said the country is looking to the northeast region as an organic hub since the country’s best fruits and vegetables are produced in the region.

“In addition to providing the best fruits and vegetables, we (NE) provide the best ecological services as the region is considered to be the youngest soil in the world,” he added.

Kikheto said earlier that Naga farmers could not engage in farming on a commercial scale due to infrastructure and road connectivity issues, but added that the issues would be resolved in a few years. He said that 80% of the Nagas live in rural areas of which 75% are engaged in agriculture, mainly the traditional culture of jhum.

“As jhuming is not economically and ecologically viable, we decided to introduce integrated sedentary agriculture of the Naga model. If it is successful, we will implement the model in all districts, ”said the APC.

He also stressed the need to revive the springs and create water bodies for any agricultural activity to ensure dual cultivation and sustainability.

To buyers who converged from different states of the country, Kikheto asked them to be the ambassadors of Nagaland organic products. He told buyers that the state is free from any kind of discrimination on the basis of caste, religion, region, etc. and urged them to feel comfortable doing business with Naga farmers. He urged them, however, to give farmers the best price for their products.

The deputy director general of the Authority for the Development of Exports of Agricultural and Processed Food Products (APEDA), Sunita Rai, said the Authority is trying to bring the Northeast region on the export map of the India.

Presenting an overview of the biological scenario in the state, the additional director of agriculture, S Kivikhu Achumi, informed that 6,000 hectares have been certified organic so far.

The inaugural program was attended by the Director of Agriculture, Mr. Ben Yanthan, the Director of Horticulture, Dr. Elithung Lotha, host of officials from both departments and organic growers in the state.

The program is supported by the Mission Organic Value Chain Development for North Eastern Region (MOVCDNER), the Ministry of Agricultural Cooperative and Farmer Welfare. The departments of agriculture and horticulture formed 14 numbers of agricultural producer organizations under MOVCDNER focusing on value crops.